Cryptocurrency is digital or ‘virtual’ money, which uses cryptography to secure its transactions, to control the creation of additional currency units, and to verify the transfer of assets. Cryptography itself describes the process by which codes are written or generated to allow information to be kept secret.

In contrast to traditional forms of money which are controlled using centralised banking systems, cryptocurrencies use decentralised control. The decentralised control of a cryptocurrency works through a ‘blockchain’, which is a public transaction database, functioning as a distributed ledger. This has advantages in that two parties can transact with each other directly without the need for an intermediary, saving time and cost.

Bitcoin was the first decentralised cryptocurrency (the first ‘genesis’ block was created in 2009), and currently has the highest market capitalisation. Since then however, numerous other cryptocurrencies have been created and there are now estimated to be over 1,600 digital currencies in existence. The second biggest cryptocurrency in terms of market capitalisation is currently Ethereum. Like Bitcoin, Ethereum exists as part of a blockchainbased network. The main difference between the two currencies is that Bitcoin focuses on tracking ownership of the digital currency with a set of rules for independent transaction validation known as proof-of-work, while Ethereum’s decentralised computing software enables its users to run programs and codes to develop smart contracts. In contrast to a standard contract which outlines the terms of a relationship (which are typically enforceable by law), a smart contract actually enforces the relationship by virtue of the program executing exactly as it has been set up to by its creators. This allows developers to build various types of distributed apps and technologies that would not be compatible with Bitcoin.

Other major cryptocurrencies include, but not limited to, the following:

Accounting for cryptocurrency assets does not fit easily within the IFRS framework. In the majority of cases, it will be appropriate to account for them in accordance with IAS 38 ‘Intangible Assets’ either at cost or at revaluation. Use of the revaluation method depends on there being an active market for the cryptocurrency in concern. In limited circumstances, it may be appropriate for an entity to account for cryptocurrency assets in accordance with the guidance set out in IAS 2 ‘Inventories’ for commodity broker traders.

Grant Thornton have published two IFRS Viewpoints on the subject. The first explores the acceptable methods of accounting for holdings in cryptocurrencies while touching upon other issues that may be encountered, whilst in the second viewpoint it seeks to explore the accounting issues that arise for miners and validators in mining and maintaining the blockchain in accordance with existing IFRS.

IAS 2’s default measurement approach is to recognise inventories at the lower of cost and net realisable value. However, the Standard states that commodity broker-traders are instead required to measure their inventories at fair value less costs to sell, with changes in fair value less costs to sell being recognised in profit or loss in the period of the change. Our view is that this will only be appropriate in narrow circumstances where cryptocurrency assets are acquired by the reporting entity with the purpose of selling them in the near future and generating a profit from fluctuations in price or broker-traders’ margin. 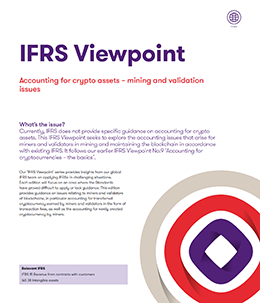 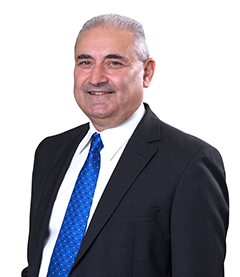