Tourism continues to be one of the main contributors to GDP

2018 was an exceptionally good year for Malta’s tourism industry as the number of inbound tourists reached a record 2.6 million, reflecting an increase of 14.3% over the previous year. This has ensured that the sector remains a major contributor to the Maltese economy and, according to the World Travel and Tourism Council, accounts for 27.1% of the country’s Gross Domestic Product (GDP) when the wider effects from investment in tourism and its supply chain are taken into account. This represents a contribution that is much higher than that in Europe and the World, where tourism contributed 10.3% and 10.4% to GDP, respectively.

It is thus not surprising that the World Travel and Tourism Council also reported that the Maltese tourism sector’s contribution towards local employment has increased consistently throughout the past few years. This positive performance is expected to continue in the near future, with the sector’s value added expected to grow by 4.2% p.a. to reach 32.9% of GDP by 2028; largely due to the island’s attractiveness as a versatile tourist destination. 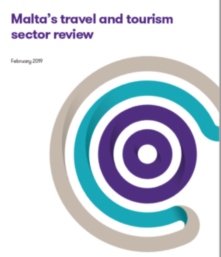 Despite the increase in total tourist expenditure, the expenditure per tourist decreased by 5.5% to €809, in part reflecting a decline in the average length of stay from 7.3 days in 2017 to 7.1 days in 2018. In line with the previous year, the highest spending tourists originated from Australia, Switzerland and USA, while the lowest spending tourists were Hungarians spending an average of €586 per visit.

Growth in hotel guests is mainly attributable to an increase in 4-star hotel nights, registering an increase in 66.6k guests (11%), however the highest increase was experienced in 3-star hotels which increased at a rate of 13%. The two other categories experienced a marginal decline in guests being 5-star hotels by 1% and 2-star hotels by 0.3%. Other accommodation types, comprising of guesthouses, hostels and tourist villages, increased by 37% in 2018 when compared to the corresponding period of 2017.

Net use of bed places (occupancy rates) increased in all types of accommodation besides 5-star and other which remained constant. Occupancy rates in 3-star hotels experienced the highest increase in occupancy of 6 percentage points during the first three quarters of 2018 as compared to 2017.

On average, total occupancy rates increased by 3 percentage points from 52% during the period of January to September of 2017 to 55% during the corresponding period in 2018.

Analysing tourism figures by purpose of visit, holiday tourists increased by 18.2%. This may have been due to the organisation of a number of events during 2018, such as the Malta Music Week, which continues to be a major tourist attraction. Another factor that may have influenced tourist arrivals was the series of events organised as part of Valletta 2018, the European Capital of Culture for the year. In contrast, visits for educational, religious and health tourism purposes declined by 18.1%.

The aviation industry as an enabler of tourism

Although air passenger movements reached a record 6.8 million during 2018, Malta International Airport (MIA) is forecasting a further increase of 5.8% in traffic for 2019. Furthermore, MIA is currently collaborating with the Ministry for Tourism and the Malta Tourism Authority on a strategy regarding route network expansion. Through this significant investment program, Malta will continue to improve its airline connectivity across neighbouring strategic areas in 2019 and beyond. This highlights the existing confidence in the nation’s potential as a top tourist destination even during the off-season period.

Are you in or interested in the tourism industry?

Grant Thornton offers a wide variety of services to support your needs, including:

As a leading advisor to the financial services industry, we offer in-depth industry experience, extensive international connections and innovative solutions to help you innovate and grow.