From pricing and reputational risks to the threat of systems overload and cash flow disruption, indirect taxation is nothing like as easy as it seems. So how do you manage the hidden complexities of indirect taxation?

Almost everything that makes value added tax (VAT) and goods and services tax (GST) attractive to governments can make it a headache for businesses as a lot of the legwork and complexity is passed to them.

And as indirect tax is used to help bring e-commerce imports into a taxable net that is both virtual and physical, indirect tax is providing the catalyst for moves to real-time tax reporting, audit and collection.

Download the article for insights and actions for your business 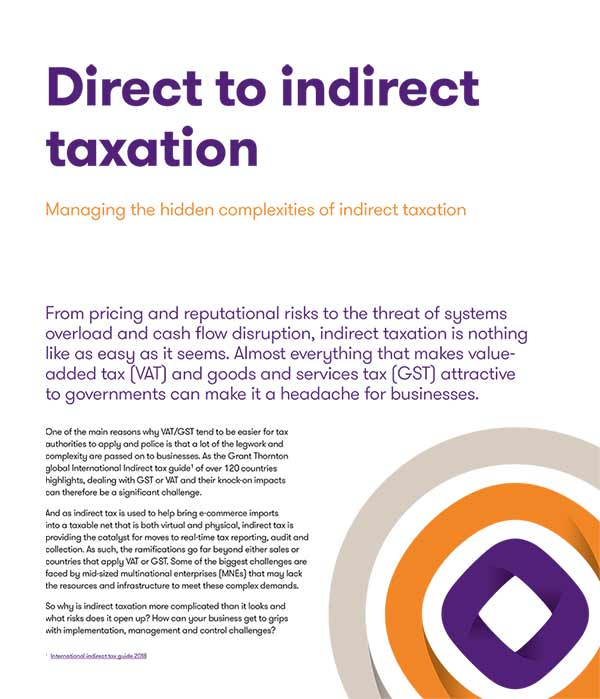 Indirect tax is in the spotlight

Compared to direct taxation (eg corporate and personal income tax), indirect taxes are generally cheaper for tax authorities to collect and easier to police. Indirect taxes pass a lot of the burden of tax evaluation on to companies by attaching themselves to multiple transactions rather than their outcomes (eg income and expenditure).

VAT, GST and sales taxes also allow tax authorities to apply a flat rate tax, albeit with the complication of minimal turnover thresholds for businesses and exemptions for certain goods and services. Further impetus has come from the competition to attract MNEs into local markets, with increases in indirect taxation giving scope to cut headline corporate tax rates.

While these benefits have always been there, the overwhelming argument for an increasing number of policymakers is the opportunity to use indirect taxation as an effective way to tax digital imports and other aspects of the virtual economy.

Australia is one of the countries to have applied this so-called ‘Netflix tax’. Foreign businesses are liable for a flat rate GST of 10% on imported services and digital products supplied to Australian consumers. Also poised to follow suit are

While a lot of the focus is on new applications of VAT/GST (eg the introduction of VAT in the Gulf Cooperation Council states), just as significant are increasing rates and penalties within many countries and the administrative obligations in many jurisdictions. Tax authorities are also removing exemptions (eg fuel in the Philippines) and tightening up rules (eg changes to holding corporation regulations in Canada).

Implications for your business

While businesses can’t reclaim sales taxes, VAT/GST are harder to implement and manage given the multi-stage nature of the VAT/GST.

Unlike a sales tax, VAT/GST is levied on the difference between the purchase and the resale price – the 'value add'. As such, businesses can generally reclaim as well as pay tax, and therefore the net result should in theory be to tax just the profit on the supply of goods and services.

In practice, this is not the case as labour and payroll costs generally do not attract GST/VAT and the tax systems impose significant operational costs and risk of error. This includes collating and reporting multiple supply data. The challenges are compounded by the fact that implementation and changes in VAT/GST are now routinely being used as the catalyst for moves to digitise real-time tax reporting, audit and collection.

There is also a lag between paying and reclaiming tax, which can stretch out for months and even in some cases years. The complexities of managing payment and claiming refunds are heightened by multiple and not always clear exemptions.

Implications for your business

It’s not just the immediate demands of VAT/GST that are complex and challenging, but the extent to which it forms part of wider shifts in how businesses are taxed (production to consumption), where they’re taxed (new definitions of PE) and how they engage with tax authorities (real-time tax).

Rather than looking at indirect taxation in isolation, it’s therefore important to look at how it fits into the wider future of tax, systems modernisation and engagement with tax authorities.

The better prepared your business is, the bigger the opportunity. If you’re not sufficiently aware, mobilised and strategically and operationally ready to go-live, the bigger the risks of adverse profit and loss impacts, non-compliance, tax investigation, reputational damage and cash flow problems.