Grant Thornton is pleased to announce that it has been appointed as Corporate Advisors for Klikk Finance p.l.c. in respect of an issue of €2,000,000 5.25% Unsecured Bonds 2027.

Klikk Finance p.l.c. (the Issuer) was incorporated on 12 May 2011 as a public limited liability company, registered in terms of the Companies Act with company registration number C 52833 and is domiciled in Malta. The Placement Agent, Manager and Registrar for the bond issue is Financial Planning Services Limited. 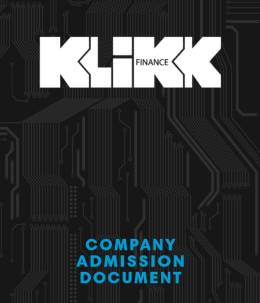 Klikk Finance p.l.c. (C 52833), of The Factory, Mosta Road, Lija, has issued a statement, in terms of the rules of Prospects, the market regulated as a multi-lateral trading facility operated by the Malta Stock Exchange.

The company announced that the offer of €2,000,000, 5.25 per cent unsecured bonds 2027, issued in terms of a Company Admission Document dated July 3, 2017 and offered via subscription through Financial Planning Services Limited in its capacity as placement agent, manager, and registrar, has been fully subscribed.

Subscriptions closed on July 21. In a statement, the board of directors of the company thanked its advisors Grant Thornton, Financial Planning Services Limited and the investing public, for their strong support in the bond issue.